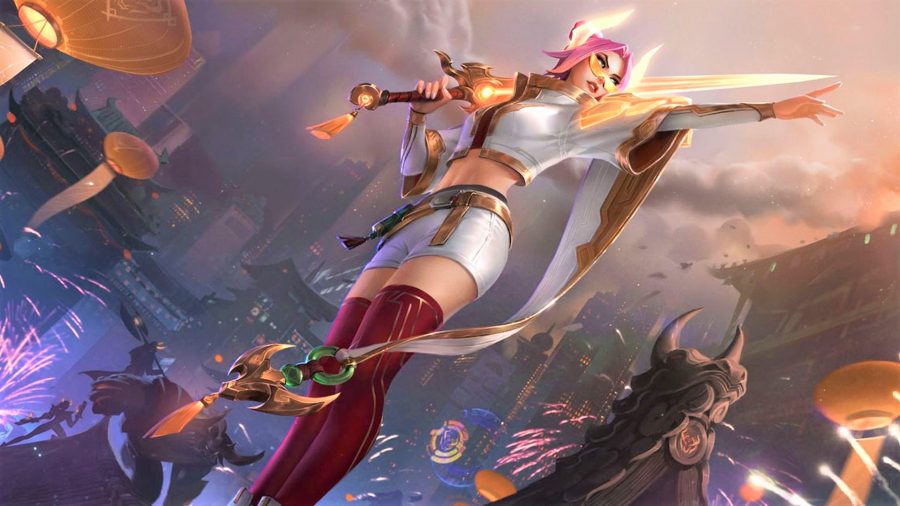 This is one of the oldest skins in LoL, so it’s no surprise that it’s rare and extremely valuable. It was released in 2009 and you would have had to have a great vision to anticipate back then just how much it would cost 12 years later.

Right now, it’s estimated that only 65,000 copies of Black Alistar exist, which means that less than one LoL player in 1500 has one. At this rarity, the fact that the skin costs around $400 – $1000 is understandable. In other games, such as CS:GO, skins can cost 100 times more at this level of rarity.

Back in 2009, Black Alistar was offered in the game’s collector’s edition on preorder, so there’s no way of buying one today except from one of the people who bought it more than a decade ago, or from one of their buyers. In that sense, Black Alistar is like Bitcoin. Since the amount is finite, the value goes up with the number of interested buyers.

From a visual standpoint, Black Alistar is a nice-looking skin that gives the champion an image of mystique and strength. It certainly makes him more imposing than his standard skin. The image of the Minotaur comes to mind more easily this way. The purple color is not necessarily a bad one, but it’s not as strong as black.

Black Alistar brings no changes to the champion except for the visual one. So there are no new animations, particles, or sounds. The design is very simple and elegant, but the value of the skin mostly comes from its rarity.

Rusty BlitzCrank is a very old LoL skin, dating back to 2009. The fact that it was removed from the store after release and that it’s never been made available again makes it one of the rarest skins in the game. For a while, Rusty BlitzCrank was available for purchase and its cost was 520 RP. But at this point, it’s likely gone forever and the only way to get it is from one of the small number of owners.

Rusty BlitzCrank is a simple skin in terms of design, offering no new particles, animations, or sounds. The only change it brings to him is the texture.

UFO Corky was released at the start of 2010, so it’s more than a decade old. That alone gives it a bit more value. On top of that, it brings impressive changes to the champion’s standard look. The model is changed with a new UFO and new texture to match, as well as new particle trails for his abilities. There are no new animations or sounds, but the visual aspect of UFO Corki is amazing.

This skin is not available in the store and was given for free to all accounts that had registered before January 14th 2010. The champion himself was also offered as part of the deal.

Many people consider UFO Corki to be the first legendary LoL skin. As for the champion, he was the first one to have two legendary skins.

PAX Jax is a semi-rare LoL skin that dates back to 2010. It brings minor model changes to the champion but no new particles, animations, or sounds. It was gifted to those who attended the PAX gaming event that year.

PAX Jax is a reference to the Cardboard Tube Samurai from the webcomic named Penny Arcade, which focuses on video games and gaming culture in general. The creators of Penny Arcade were responsible for the Penny Arcade Expo (PAX) and PAX Jax is the link between them. The skin also contains a symbol that reminds people of Pac-Man.

Jax is one of the 3 champions that were selected for the PAX-themed skins. The other two were Twisted Fate and Sivir.

At the moment, PAX Jax is not available in the store. And that has been the case since 2014. As a result, this skin is quite rare and very valuable.

PAX Twisted Fate was offered to LoL players who attended the PAX gaming event of 2010. This is a semi-rare skin that offers new textures only for the champion’s skin and brings no new particles, animations, or sounds. Its release date was 08.09.2009.

PAX Twisted Fate was initially offered to around 20,000 people. The skin was available as redeemable using a code written on a coupon. After the Penny Arcade Expo event was over, some players decided to sell their codes online, in some cases for close to $500.

Visually, this skin looks awesome and features the champion in black and blue clothes. Since it hasn’t been available in the store for a long time, it is considered to be quite rare.

Championship Riven was released in 2012 and it’s a legendary skin that was created to celebrate the World Championship that year. Right now, it is no longer available in the store. But when it was, its cost was 975 RP.

Unlike other rare skins, Championship Riven brings several changes to the champion’s standard model. It modifies it and gives it a new sword, armor, and hair colour. It also offers new particles for all abilities and a new recall animation. However, it comes without any new sounds. Championship Riven was inspired by neon blue lava from Ijen, an Indonesian volcano.

Initially, this skin was offered to people who physically attended the World Championship. Some of them decided to sell it online and got hundreds of dollars for it. But after a while, Riot disabled skin codes and this brought an end to online skin trading.

Championship Riven was available for around 9 days in the store, but then it got removed. The only other occasion where people had the opportunity to earn it was in 2015. And that’s because it constituted the prize for World’s Pick’em. However, due to the harsh conditions of the contest, only one person managed to get it.

King Rammus is an ultra-rare LoL skin that was released in 2009. Its design is very simple, adding no new particles, animations or sounds to the champion. The only thing it does is to recolour his model with new textures. The shell is green for instance.

Because the skin was released before the game was even made available to the public and is no longer available in the store, it truly is one of those rare items that can dramatically increase the value of a LoL account.

King Rammus was first offered to players who participated in the closed beta of LoL. This stage took place between April and October 2009. The skin was automatically added to their accounts at the end of this process.

Because there is no skin code that would allow you to sell King Rammus, this skin is bound to a player’s LoL account. If you want to possess this skin, you must acquire the entire account.

The King Rammus skin is a reference to King Bowser Koopa from Super Mario. Its green shell is very similar to Bowser’s.

Victorious Janna is a high quality, semi-rare LoL skin that was released in 2012. It is not available in the store and was offered as a reward at the end of season 2. Its design is very elegant and provides new particles for Janna’s Zephyr ability. Apart from that feature, there are no new animations or sounds.

This is just one of the 5 skins that use the Victorious theme, and was awarded to all those who attained at least Gold tier at the end of season 2. Because it was never available in the store and was only offered on one special occasion for one specific achievement, Victorious Janna is quite rare. The only way to obtain it is to acquire a LoL account that has it.

Riot Squad Singed was offered in 2010 to those who attended the Gamescom event. The skin’s code was available for a while even after the event, it is no longer available and has become increasingly rare.

This skin presents Singed as a representative of riot police. His shield and helmet match the equipment used by the real police.

Visually, Riot Squad Singed gives the champion some decent model changes, as well as a new color for his Poison Trail. But other than that, it doesn’t provide new animations or sounds for any of his abilities.

If you’re interested in this skin, the only way to obtain it is to buy a LoL account that’s a decade old and still has it.

Neo Pax Sivir is both relatively new and ultra-rare. It provides really nice visual effects, offering the champion new boomerang particles for various abilities. The skin was released in 2017 and constitutes an updated version of the original, PAX Sivir.

This skin features a new color design that makes the champion stand out. In many ways it is similar to the original, but still offers it a fresh look.

Neo PAX Sivir is no longer available, but you might still find codes for it online. The price depends on the vendor. Another way of obtaining it is to buy a LoL account that has it.

Grey Warwick is a decade-old skin that offers the champion a recoloured model. Apart from that, nothing fancy. But the skin is quite rare because it was offered on a special occasion, to players who told a given number of friends about the game. Keep in mind, this was in 2010, when League of Legends was still a new title on the market.

This skin is not very rare but its age still gives it a decent value. If you don’t have it, you could obtain it by purchasing a LoL account that already owns it.

Released in 2010 and currently unavailable, Medieval Twitch is one of the rarest skins in League of Legends. Visually it isn’t fancy, but it does provide new textures for the champion and a new weapon. Furthermore, it also comes with new animations for Recall and new sounds for Twitch’s abilities.

Medieval Twitch was originally offered as a reward who convinced their friends to try the game. It was designed by two LoL players in 2009.

Because of the huge number of referrals that were needed to obtain the skin, Medieval Twitch is quite rare. The best and only way to obtain it these days is to purchase a LoL account that has it.