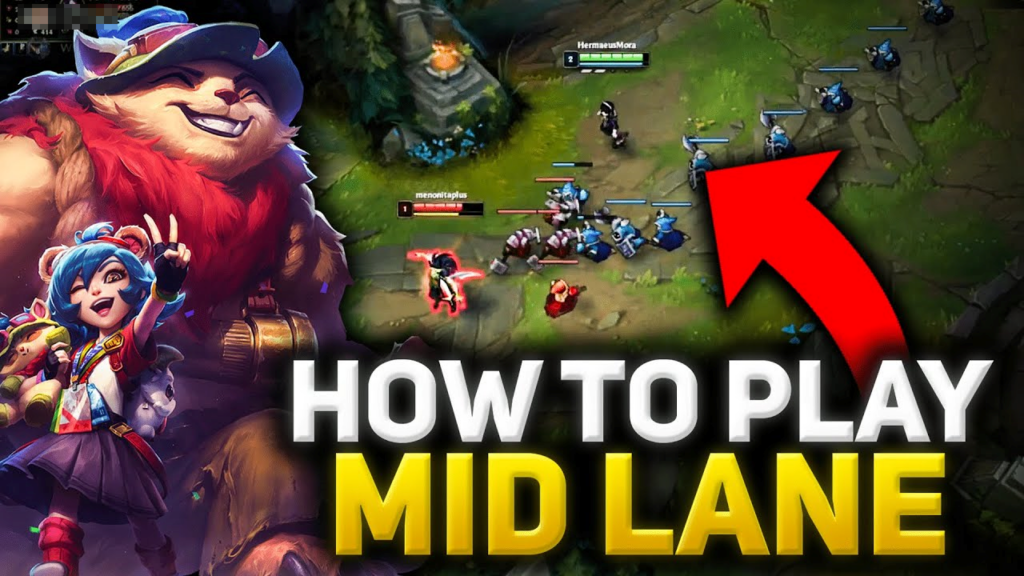 How to Play Mid in League of Legends

Playing Mid in League of Legends is a huge responsibility. And that’s because your team will rarely win the game if you fail to do your part really well. Here are some considerations to take into account if you want to excel as a Mid player.

What’s Expected of a Mid Champion

A team’s Mid, along with the Jungler has the highest amount of flexibility in any given game. Top and Bottom pretty much have to stay where they are and there is little room for maneuvering. If you try to move around even a little you will miss important creep waves and risk falling behind. The movement speeds and the map distances do not allow players to be dynamic. Even the Mid is immobile for the first 5 – 10 minutes. But after that, he gains the ability to leave his lane from time to time and make plays somewhere else.

A Mid champion is expected to carry his team more than anyone else during the mid portion of the game. And that’s because his champion’s level and skill set turn him into the strongest champion of his side, unless something went wrong. At the 15 minute mark, the ADC still needs to farm for 5 – 10 minutes before he can be a monster and turn into the main carry of his team. But the Mid is pretty much ready, even though there’s still a lot of room for growth.

If you fall behind the enemy Mid, what’s likely to happen is this: he will roam and create space for his ADC while you will be static, farming a single lane and a little bit of the jungle. Your moves will be predictable while your opponent’s won’t. This allows the enemy team to fully dictate the pace of the game and the key battles around the map. This is usually a recipe for failure if you’re on the receiving end.

As a Mid, you’re expected to keep up in farm with the enemy Mid and simply not die. This can be a difficult objective a lot of times, either because you’ve been counterpicked or because the other player is more skilled than you. Or it can be due to the fact that the enemy side has an amazing Jungler who knows exactly how to play to secure kills for his teammates.

If you don’t die, farm well, and know how to last hit even under your own tower, you’re already better than most Mid players. The next thing to think about is how to gain an advantage and snowball out of control.

Champions to Learn for the Mid Role

The Mid lane tends to favor Mages who have excellent range and can kill minions with ease. But that doesn’t mean you always have to pick such champions. If you know what you’re doing, you might easily excel with an assassin like Zed. Or with a fighter like Yasuo. A lot depends on the matchup but also on your mastery with a given champion. The equation always includes more than one variable.

Given a bad matchup, you might still win it if you have 500 games on your champion while your opponent only has 10 on his. So the key is to pick a small number of champions (5 – 7 should be plenty) and then master those. Play them even when you don’t want to play them, just to challenge yourself. If you don’t have a personal style and a set of preferences yet, you should try the following 7 and discover which ones you like most:

Always remember that the more you study a champion and experiment with it, the better you’ll become with it. So don’t judge too quickly. Play at least 10 games with a champion before you make a decision to include or exclude it from your set of favorite champions that you’re going to master over the next few years.