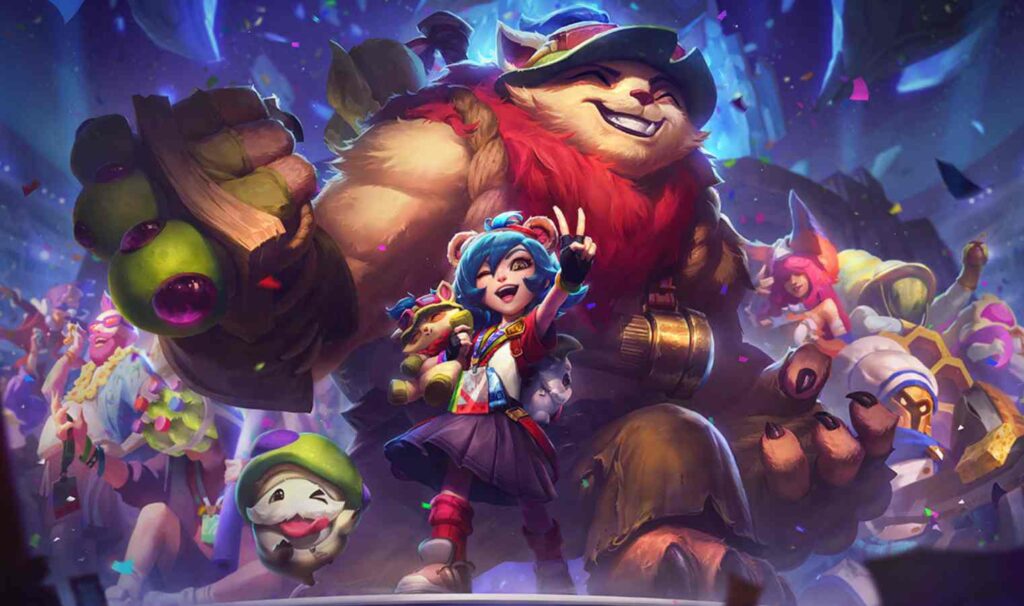 A Quick Guide to League of Legends

League of Legends, better known as LoL by those who play it, is a Multiplayer Online Battle Arena game developed by Riot Games and released in 2009. Its complexity is hard to put into words but you can still manage it if you specialize in a role and master it.

How League of Legends Works

LoL is a combination of RPG and RTS elements. It is played in a team versus team format with 5 players on each side. The goal is to become stronger than your opponent and gradually destroy the buildings that stand between you and their Nexus, which is the equivalent of the king in chess. The side that’s first to destroy the other’s Nexus wins.

League of Legends revolves around champions and each of the 10 players gets to pick one at the start of the game. The total champion pool numbers around 157 options to choose from. When a champion is picked, nobody else can pick it. And since there are 5 of them on each team, the two sides can play uncountable combinations and be as creative as they want.

Each champion has 4 abilities, which can be levelled up. The first 3 abilities can be selected at level 1 while the 4th becomes available for the first time at level 6. The maximum level that you can reach during a game is 18.

Apart from growing in level and maximizing his or her abilities, a champion can also buy items from the shop. For this you need gold, which you can gain by killing creatures, as well as enemy champions and buildings. The more gold you have, the better the items you can buy, and the stronger you become, which in turn allows you to be even better at killing creatures and champions, and at destroying buildings.

The goal is to grow in power as fast as possible, or at least faster than the enemy team.

In League of Legends, the two teams are separated by a river and compete on a fairly symmetrical two-sided map. This map has 3 lanes on each side, called top, mid, and bottom, and in between these lanes there is a labyrinth full of grass, bush, and creatures, known as the jungle.

On each lane there are 3 towers protecting the Red team and 3 towers protecting the Blue team. Both sides seek to destroy their opponent’s towers and advance toward their base. Inside this base there are two towers in front of the Nexus, and one inhibitor guarded by one tower at the entrance of each lane. If an inhibitor is destroyed, the enemy creatures (called minions) that regularly spawn on that lane (every 30 seconds) become much stronger.

As was previously mentioned, each team gets a small group of minions every 30 seconds. These minions cannot be controlled by the players and simply attack everything in their path until they get killed. Furthermore, they never leave their lane.

Players always seek to kill these minions and more importantly, land the last killing blow. Doing this gives you a certain amount of gold for each kill you make. You get experience points whether you land the last hit or not, but you only get gold if you’re the one who killed the minion. This is why last-hitting is one of the most important skills in League of Legends.

Apart from the lane minions, there are also jungle creatures, called neutral monsters. These creatures stay close to their spawn location and don’t hurt anyone unless they’re attacked. They are usually much stronger than the lane minions and give a lot of gold and experience. Because of that, players try to kill them as often as possible. If killed, they spawn back at the start of the next minute of the game.

Besides the lane minions and the jungle creatures, in League of Legends there are 4 other important creatures: drakes, the Elder Dragon, the Baron Nashor, and the Rift Herald. All of them play important roles within a game and the team that kills them receives certain buffs or advantages. Because of that, a lot of the big team fights tend to take place around these objectives.

How to Play Ranked in LoL

After you get to level 30 on your LoL account, you are allowed to play ranked games. Of course, you can always skip this boring part by buying a fresh level 30 account from us. But if you want to start from scratch, just be aware that you will be required to put in around 150 hours of play to reach that level.

Once you’ve reached level 30, you can start playing ranked. And if you win, the games get gradually harder. That’s because you get points every time you win a match and then the matchmaking system finds for you teammates and opponents of roughly the same skill.

In League of Legends, there are 9 tiers or divisions in total: Iron, Bronze, Silver, Gold, Platinum, Diamond, Master, Grandmaster, and Challenger. The higher you climb, the stronger the players you will face. Most people play in Silver, Gold, and Platinum. By the time you’ve reached Challenger, only one player in 10,000 is as good as you are. So as you can imagine, very few of LoL’s 100 million players reach that tier.

In League of Legends, because of the enormous number of notions that you need to learn just to understand the game at a basic level, mastery takes years of study and practice. Don’t expect to get good overnight. Rather, just start playing and if you’re having fun, play some more. Your goal should be to gradually improve, not to win every match. Because nobody wins every match.